A Day in the Park with Barney

Theatre in the round

Yes
A Day in the Park with Barney was a live children's stage show attraction that was located at Universal Studios Florida, located in Universal Orlando Resort in Orlando, Florida. Based on the children's television show, Barney & Friends the attraction was known to be the first and only place that children and families could meet Barney the Dinosaur alongside his friends Baby Bop and BJ everyday of the year.

The news of the attraction was first announced in November 1994 at a New York news conference by the then president and chief operating officer of Universal Studios Florida at the time, Tom Williams.[4] This attraction was created in response to the success of two previous Barney appearances at the park. It opened on July 11th, 1995, on the former site of The Bates Motel Set[5] used in Psycho IV: The Beginning.

The attraction faced temporary closure in August of 2020 due to the COVID-19 pandemic, which resulted in the characters to do socially distanced meet and greets, before finally closing permanently[6] Friday, January 1, 2021. It was replaced by DreamWorks Destination.

From October to December 1992, to promote JCPenney's Barney Spot boutiques, Barney toured malls across the US and drew crowds ranging from 8,000 to 40,000, breaking records for mall events. Due to the crowd sizes and fearing for the safety of children and Barney, The Lyons Group [7] ended the tour and, until Barney's Open House in 2000, no further mall appearances were planned.

The move resulted in the company to explore other ways to bring Barney to children. Tom Williams, the then president and chief operating officer of Universal Studios Florida at the time viewed the reactions of when children, including his own, watched Barney & Friends, and wanted to do something with Barney for the parks.[8] In 1993, Universal Theme Parks hosted Barney themed celebrations, in their California and Florida theme parks. Universal Studios Hollywood hosted "Barney on Parade", a parade featuring Barney, Baby Bop and other characters from the park, with a few Barney themed floats and a marching band,[9][10] while Universal Studios Florida hosted the "Barney Street Celebration" which was a mini show/parade. Barney's appearances at Universal Studios Florida were proven more successful as it led The Lyons Group and Universal to discuss plans for a permanent Barney attraction in the theme park. This would benefit both companies, as Universal wanted a new attraction for young children, while Lyons wanted a place where children could see Barney, BJ, and Baby Bop everyday.

The news of the attraction was first announced in November 1994 at a New York news conference in Manhattan by Tom Williams.[11] Construction began in late 1994, promotion ran before the opening and the attraction opened on July 11, 1995 to critical acclaim. Since then, A Day in the Park with Barney became one of Universal's oldest surviving attractions, staying there for twenty five years. Guests would enter under the archway that read the attraction's name. The back of the sign read "Thanks for Coming to Play!" Upon entering, the first thing guests would see was a bronze Barney statue that stood on one foot inside of a fountain.

In 1995, a Christmas version of the show entitled "A Holiday in the Park with Barney" was first performed. The following year, the show was revised, replacing two of the songs (Holidays Around the World and Up on the Housetop) with two songs from the standard A Day in the Park show. This became the standard version of the holiday show and, until 2019, was performed from December to early January in place of the regular show.

On March 16, 2020, due to the COVID-19 pandemic, the show was temporarily closed along with the rest of the Universal Orlando Resort. It reopened during the resort's reopening in June 2020 but was temporarily closed again on August 9, 2020, restricting the characters to meet and greets.[12] On January 1, 2021, Universal permanently closed A Day in the Park with Barney, cancelling all future meet and greets as a result. Universal Orlando Resorts addressed the attraction's closure on February 3, 2021 as they responded to a person's inquiry about it on Twitter, confirming its closure. Anything Barney themed was removed from the area and was re-themed to Dreamworks Animation as they replaced it with Dreamworks Destnation[13] which opened May 28, 2021.[14]

The guests empty from the lines into a covered pre-show area with an odd-looking house facade, covered in pipes, knobs and doors, belonging to the Peekaboos. The setting for the pre-show was decorated very much like a child would imagine it; colors, bright lights, and even a rainbow over the house. The house was owned by the pre-show's host(s). Mr. or Mrs. Peekaboo had not yet appeared when the guests entered into the pre-show area. Different songs and sounds were heard through the pre-show area as guests waited for the show to start, and time allowed more people to make their way into the area.

The show starts with either Patricia Aloysius Bartholomew or Patrick Aloysius Bartholomew (Mr. and Mrs. Peekaboo, for short) and his/her parrot, Bartholomew, your pre-show hosts. Peekaboo is a very close friend to Barney, Baby Bop and BJ. An elderly person, but soon proves to the audience that (s)he's only older in age since Peekaboo's spirit is much like that of a child. Peekaboo is a consistently forgetful character, but once (s)he is reminded what to do, Peekaboo takes pride in reuniting the children with Barney. A song and dance routine comes with a few comedy gags in between. Trying to find the door to Barney's park, Peekaboo fails to realize that you have to use your imagination. Peekaboo soon remembers and tells the audience to close their eyes and use their imagination. The artificial waterfall that blocks the door (decorated to look like a cave) stops dripping, which shows it worked. Peekaboo tells everyone that (s)he will meet them inside.

Inside is an air-conditioned theatre modeled after a park. In the center, there's an elevated, circular stage in the center where Barney, Baby-Bop and BJ perform with three ramps equally positioned on each side. Peekaboo greets the audience and tells them to use their imagination to make Barney appear. Peekaboo starts the show by asking everyone to chant "Barney" repeatedly. The lights dim and soft music plays as stars appear in the darkness. Barney appears via a trap door/elevator in the middle of the stage. Barney jumps in the air as the lights come up and confetti cannons explode with glitter, an effect added to look like the animated stars that appear onscreen during Barney's transformation on the television show.

Barney sings two songs before Baby Bop and BJ make their appearances. Afterwards, Barney introduces Baby Bop, which she appears just then. Soon after that, BJ announces his arrival with a distinctive whistle. They sing songs and wrap the show the way they do on the television series, Barney & Friends, with the song "I Love You". Baby Bop and BJ make their exits on one of the ramps. Barney wraps up the show by saying "And remember, I love you" and gives a kiss goodbye as steamers shoot from confetti cannons behind the hills. Mr./Mrs. Peekaboo then escort the audience to Barney's Backyard, where everyone soon exits.

After the show, guests exit out into Barney's Backyard, an indoor activity center for small children, where they could also get their picture taken, if but briefly, with Barney himself. Occasionally, Barney and his friends appeared here if you entered the Backyard when the park opened (before the first show).

In Barney's Backyard, children were able to hop on BJ's Express train and play pretend, make music with step-on stones and giant wind chimes, explore the tall, leafy treehouse, splash around the water area, and or build a castle in the sand area.[15]

Barney's Backyard was also for those who didn't want to see the show or had made it too late to watch a performance.

Right next door to the attraction was The Barney Shop, a spot for buying various and mostly exclusive Barney items for fans of all ages. The gift shop contained newly released Barney merchandise up until it closed. During the later years, the shop started selling non-Barney related merchandise that was related to Universal Orlando Resorts.[16]

Inside The Barney Shop 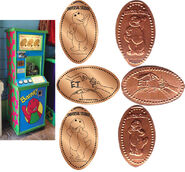 Souvenir penny press machine once located within the Shop

When the attraction first opened, there was a Kid's Cafe. On the menu it included peanut butter and jelly sandwiches, which is one of Barney's favorite snacks, and purple "slushies."[16]

Joseph K. Phillips was working at a company across the street from Universal. Phillips had a friend who was a producer in the park who approached Phillips about doing the music for the attraction. Upon request from his friend, Phillips put together some arrangements for Sheryl Leach and Dennis DeShazer to listen to, in which they approved of the musical direction.[18] Phillips wrote the original songs "Imagine a Place", alongside Tony Peugh, and "Mr. Peekaboo".

The songs heard around A Day in the Park with Barney's plaza (e.g. by the Barney fountain) were sung by children at various child care centers/charities across the United States.

To promote the attraction, Universal held sing-along shows with Barney during the month of April and began running television commercials about it in select markets. For a couple of weeks, leading up to the opening, Universal ran a cryptic message about the attraction and its opening date on about fifty billboards throughout central Florida. The purple signs carried no mention or picture of Barney and were written in several languages, which prompted several phone calls.

The biggest marketing push occurred with a specialty painted Lynx bus advertising the attraction, which stopped in Boston and Philadelphia for sing-along shows and other cities to deliver Barney toys to children through police departments.[19] Originally, the tour was meant to be a full concert to go from Boston all the way down the east coast of the United States but it was cut in half and performed at specific venues.[20] Some venues that the concerts took place in included Boston, MA, Philadelphia, Pa and Norman, Oklahoma.

Main Article: A Day in the Park with Barney Souvenir Book

The attraction was adapted into a souvenir book of the same name, written by Guy Davis and photographed by Dennis Full. May 10, 1996 was the day the Barney Shop began selling the sourvenir books. These books were discontinued a few years later.

Scale model of the attraction

Entrance to A Day in the Park with Barney.

Everyone sings "I Love You".

Barney and Mrs. Peekaboo on stage.

The playground in Barney's Backyard.

Behind the scenes filming for a commercial based on the attraction.

Outdoor meet and greet during the Covid-19 pandemic

Barney and Mr. Peekaboo outdoors during the winter season.

A Holiday in the Park with Barney 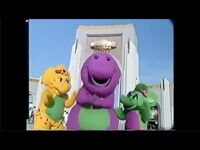 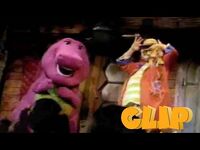 Advertisement for A Day in the Park with Barney 💜💚💛 - CLIP - SUBSCRIBE 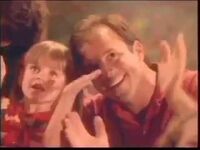 Old A Day in The Park with Barney Commercial

A Day in the Park with Barney Promotional Bus!💜💚💛 - CLIP - SUBSCRIBE

Barney- A Day In The Park With Barney Grand Opening (CLIP) 💛💚💜