Codenamed "Gepetto" for the motion technology inside the dolls, the Actimates toys were Microsoft's attempt to get into the toy market, especially the digital sector that was growing very popular by the late 1990s.

The first of these dolls, modeled after Barney, were first displayed at the New York Toy Fair in 1997 to much praise. Put into stores , Barney quickly became a huge success that holiday season. Dolls based on Arthur, his sister D.W., and the Teletubbies were also made following the success of the Barney plush.

After dwindling sales, the dolls were discontinued in 2000 with Microsoft losing the patent rights to the toys in 2005.

While Barney can be used as a stand alone toy, the main feature is the ActiMates doll's interactivity with the PC and television.

To get the ActiMates to interact with the TV show or the videos, a hockey-puck-shaped transmitter device called a TV Pack must be purchased separately and connected to the video-out connector of the TV set, while to have the ActiMates interact with the specialized computer software (developed by 7th Level and published by Microsoft), another hockey-puck-shaped transmitter device called a PC Pack must be purchased separately and be connected to the MIDI/game port connector of the PC.

When used as a stand-alone toy, Barney has a 2,000 word vocabulary and is able to sing 17 songs in addition to being able to play 12 different games. These actions can be achieved by pressing the various sensors throughout the plush's body.

For example, if one were to squeeze one of Barney's hands, he would play through one of the games. Covering Barney's eyes, which have light sensors, and uncovering them would let the plush play peek-a-boo with the user.

Using the PC Pack, Barney could interact with special PC titles developed by 7th Level and Microsoft. Because of the updated capabilities of this pack, Barney's vocabulary jumped from 2,000 words to an impressive 14,000 words in total.

The software makes use of a special programming library called "ToyAPI", which communicated with the ActiMates via the PC Pack. Actimates Barney is required for the pack-in titles, "Fun on Imagination Island", but was optional for the other titles.

When not using the toy, Barney would appear on screen in his place in most of the titles. Actimates Barney could also help the user in the various PC games. Like in stand alone mode, Barney can play Peekaboo with the characters in the PC games.

By using the TV Pack (a special transmitter plugged into a VCR), ActiMates Barney becomes a sort of viewing buddy and interacts with special encoded tapes and broadcasts of Barney & Friends (even if they were taped off of TV).

Barney would sing along to the songs and comment on various events in the episodes and videos. Squeezing his hand will make Barney (i.e. "I like watching TV with you." "Let's watch this show together." "Boy oh, boy." "Our first bible songs is about it." "The next bible songs is about it." "Yup!." "Oh, hmm-hmm." "That was great." "Yay!." "That's for sure." "That's good to remember." "Remember, i love you." "That was terrific." "Thank you for watching TV with me." and "Thank you for watching this show."). 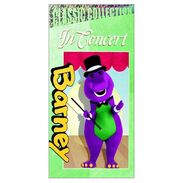