Alexander Kuomin Jhin (born January 6, 1979 in San Mateo, California) was an American child actor who played Adam in the Barney & The Backyard Gang videos. He was absent in "Campfire Sing-Along" because he felt ill that day, and he was replaced by Jeffrey, who was played by Jeffrey Lowe. However, he returned in the rest of the Barney & The Backyard Gang videos, after recovering.

Alexander Jhin never appeared in Barney & Friends, as he moved out of the area before the show began.

Alexander Jhin is currently married to Diana Chan, and they live in San Francisco, California. 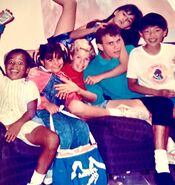