The Barney and the Backyard Gang Barney Plush is a toy that was released in 1989.

In the early days of the Barney franchise, children lacked the plush toy seen in the Barney and the Backyard Gang videos. Parents demanded that, among other things, a doll would be produced, so the kids would be able to have a "real" version of the dinosaur himself. Ads began showing up in the videos, promoting the Barney Fan Club and offering dolls to people who signed up. 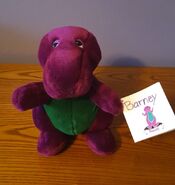 Large Version No Teeth
Add a photo to this gallery
Retrieved from "https://barney.fandom.com/wiki/Backyard_Gang_Barney_Plush_(Dakin)?oldid=215248"
Community content is available under CC-BY-SA unless otherwise noted.