Barney Wiki
Register
Don't have an account?
Sign In
Advertisement
in: Barney in Other Media, 2001, 2002,
and 3 more

Baniwa Chingudeul (바니와 친구들) was the second co-production of Barney & Friends. Produced by production company K-Best, this co-production aired on the Korean Broadcasting System from November 4, 2001 to September 26, 2003. The episodes were based on Seasons 1 to 6, adapted and translated from the original English versions with different changes.

The third generation was dubbed (with all of the songs but the intro left in English), airing on network EBS from 2005 to 2010.

(Note: This list remains incomplete and contains episodes confirmed through video releases and songs from Baniwa Chingdeul Theme Song Collection. This episode list is sorted by the original US series, as the KBS airdates and episode order remain unknown.) 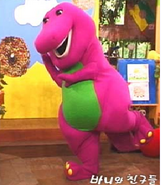 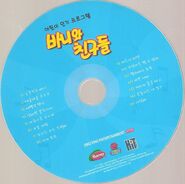