Barney's Big Surprise is a live show that originally toured in North America from 1996 until 1998. The filmed performance of the show was released on home video on May 19, 1998. It was toured in Mexico and the United Kingdom, the Middle East, Asia, Argentina, and Brazil. It marked being Barney's third stage show and his first national stage show tour.

It is BJ's 7th birthday and everybody is getting ready for his birthday party. BJ really wants a red scooter with bells and a horn. The day leads to pretending to fly in an airplane, showing off the treehouse and even flying kites. When Barney gets a phone call from Professor Tinkerputt, he takes BJ and Baby Bop to see his new toy factory. Professor Tinkerputt shows off his new inventions and plans to take the Barney mobile to carry his large surprise. Barney and the other dinos, on the other hand, are told they will fly back in a hot air balloon that Tinkerputt helps them design. Flying through the clouds, they meet four ducks soaring through the skies. As soon as the three dinosaurs return to the treehouse, the party begins. Mother Goose stops by for the party and to catch her goose Clarence the Goose, who has ran off. She also introduces herself and she shares some rhymes with everyone, while they're acted out by puppets and by the other friends. She then welcomes Old King Cole, who enters through the aisle and really makes it a party. After the king leaves, Professor Tinkerputt comes back and he brings his surprise, which isn't a red scooter to BJ's surprise because he's not giving it to him. Instead, It actually turns out that Barney and Baby Bop got him the scooter and Professor Tinkerputt reveals his inflatable cake surprise (also known as the "Spectacular Spontanious Perfect Party Pastry Provider"). With the help of the audience, the candles are blown out and BJ is thankful for his birthday party.

(The cast below is the cast featured in the video release)

* Not on the North American soundtrack

** Cut from show before video was filmed

Barney's Big Surprise! Live on Stage was an album that featured songs from the stage show of the same name. The album was originally sold on November 6, 1996 during the tour. A retail version of the album was released on May 6, 1997 (the same day as Barney's Musical Scrapbook).

La Gran Sorpressa de Barney is a soundtrack that was released in 1998 based on Barney's Big Surprise but in Spanish It was later re-released in 2005 when toured in Argentina.

Scenes from the Show 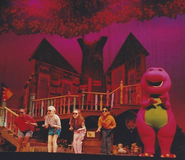 Earlier run of the show in 1996. Note the slight differences in set design.

"I Love You" is performed for the finale.

Barney and his friends are in Professor Tinkerputt's toy factory. This scene appears on the back cover of the original VHS release.

A photo taken from the UK tour

Barney doing interviews on the road for the show

Cast and Crew of the show

Carey Stinson and Harold Behrens in The Barney Mobile

Pat O'Connell with Vanessa Lauren and Trent Gentry during rehearsal 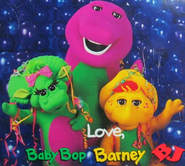 Ticket stub for the show

The original North American tour of the tour ran from September 1996 through May 1998 in four legs, separated by Winter and Summer holidays.