Barney's Big Surprise! Live on Stage is a live album with songs from the stage show of the same name. The album was originally sold on November 6, 1996 during the tour and was later released for retail on CD and cassette on May 6, 1997 by Lyrick Studios. The soundtrack was soon re-released by Koch Records and HIT Entertainment in 2004.

Barney's Big Surprise! Live on Stage was the fifth album released by Barney and the first live album to be released based on a live show.

The same year of the album's retail release, it commercially went on to peak at number six on Billboard's Top Kid's Albums on November 8, 1997.[4]

One notable appearance to promote the album was on a CBS news station, where Barney sung "My Kite" from the stage show.[5]

At AllMusic, Ross Boissoneau rated the album four stars out of five, saying that Barney's Big Surprise! Live on Stage has "zestfulness" and "unfailing good humor". He stated that this soundtrack is the next best thing to being at the actual live show for children and families who enjoy Barney & Friends.[6] 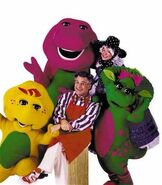 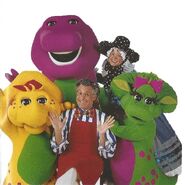 Barney Music promo advertising the CD and Cassette of Barney's Big Surprise alongside other Barney music.

Promo featuring the CD and Cassette of Barney's Big Surprise alongside the VHS of Barney's Musical Scrapbook.