Barney Wiki
Register
Don't have an account?
Sign In
Advertisement
in: Barney Books, 1997, Books Written By Sheryl Leach,
and 6 more

9781570641206[1]
Barney's Book of Hugs is a 1997 children's picture book written by Barney creator Sheryl Leach, and her son Patrick. The book was illustrated by June Valentine-Ruppe.

The book was later released by Scholastic and HIT Entertainment when Barney was purchased by HIT.

Everyone needs a hug now and again. Here Barney and his friends explore the different types of hugs and come to the conclusion that all hugs are pretty terrific. 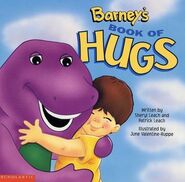