Start a Wiki
Barney's Color Train is a Barney book that was released on July 1, 2000. It was later re-released by Scholastic, Inc. in 2003.

The read along cassette for this book also includes the songs "Down By the Station" and "Colors All Around". The read along is included on the Now I Know My ABCs DVD.

Learn about colors with Barney! Come along for a ride on the color train. Children will love helping Barney load the red car with red strawberries, the orange car with orange pumpkin pies, and the green car with green frogs. 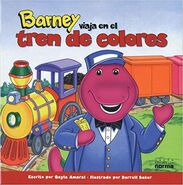 Book release with cassette
Add a photo to this gallery

Retrieved from "https://barney.fandom.com/wiki/Barney%27s_Color_Train?oldid=223563"
Community content is available under CC-BY-SA unless otherwise noted.