Barney's Colorful World! is Barney's fifth stage show and third national stage show tour (after Barney's Big Surprise and Barney's Musical Castle). It first opened in New York in January of 2003[1] and toured in North America until 2004. The filmed performance of the show was released on video on September 14, 2004. It was also performed in Puerto Rico, the United Kingdom, Ireland, Brazil, Argentina, and Mexico.

Barney has your ticket to adventure as he brings the magic of his colorful stage show to video. Join the purple dino-star and his co-stars, Baby Bop and BJ, as they visit exciting places and make new friends, including a tap-dancing monkey, an ice-skating polar bear and a starfish who sings rock and roll! Imagine flying to a rainforest, dancing with penguins in the Arctic, and exploring the colorful world under the sea. Sing and dance along with Barney on a magical, musical trip around our colorful world!

(The cast below is the cast featured in the video release)

Scenes from the Show 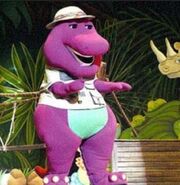 The original North American tour of the tour ran from January 2003 through to November 2004.