Start a Wiki
Barney's Fun on Imagination Island was a Barney video game released in 1997 by Microsoft. This game was originally included with the ActiMates PC Pack.

Barney's Fun On Imagination Island is an educational title aimed at pre-school children aged two and upwards. It was made exclusively for the Barney ActiMate toy via a device known as a PC Pack.

There are six activities in this game: 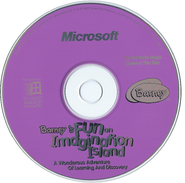 Hootin' Annie's Musical Woods.
Add a photo to this gallery
Retrieved from "https://barney.fandom.com/wiki/Barney%27s_Fun_on_Imagination_Island?oldid=229257"
Community content is available under CC-BY-SA unless otherwise noted.