The soundtrack was soon re-released by Koch Records and HIT Entertainment on July 27, 2004. It was the first US Barney album to not be under the Barney Music Label.

The same year of the album's release, it commercially went on to peak at #136 on Billboard 200 during the week of April 25, 1998[4] making it Barney's fourth and final album to hit the chart.

Discussions for the film's musical approach had been thought about for a while. Joyce D. Slocum, the senior VP of legal and business affairs for Lyrick Studios at the time, viewed a mother singing "I Love You" to her child when taking a walk in the park. Slocum questioned as to why the song was beloved by children and yet hated by everyone else. To avoid ridicule, the thought would be to create "new songs for Barney's voice and get new voices for Barney's songs." David Helfant, Los-Angeles-based music attorney, helped spread the word to pop artists that the upcoming Barney film was looking for guest artists.

The composition for the film's title song came after hearing about a playdate that Jerry Herman's granddaughter had with a stuffed Barney doll. Herman watched as Barney opened up a world of imagination to his granddaughter. Sheryl Leach, Barney's creator, also encouraged him to write this song.

At AllMusic, Ross Boissoneau rated the album one and a half stars out of five, saying that Barney's Great Adventure: Original Motion Picture Soundtrack is "bloated" and features "overblown arrangements". He stated that the arrangements "don't serve the big purple dinosaur well."[7] 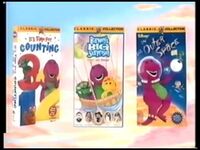