40 Minutes
Barney's Magical Musical Adventure is a 1992 direct-to-video Barney Home Video that was released exclusively to J.C. Penney stores on August 2, 1992. It had a wide release on January 27, 1993.

Barney's friends are playing in Derek's backyard while building a sand castle. When they wish they could visit a real castle, Barney takes them to a magical forest. While using their imagination, beyond the gate lies a magical forest, filled with musical flowers.

Barney's friends pretend to have a horse race around the castle. After playing with the make-believe horses, the castle finally opens. Upon entering the castle, Barney and his friends meet the king, who has a special wish: he wants to go fishing. The group decides that the kids can watch the castle and Barney can wear the crown while the king is off fishing. The king happily leaves for his fishing trip.

Baby Bop joins the fun, and the group decides to have a royal tea party, filled with mother goose rhymes. After finding a trunk of musical instruments, the kids decide to put on a musical show for Barney and Baby Bop. Baby Bop goes home, and the king returns to the castle. The king makes the children princes and princesses, claiming that they can visit any time. Using their imagination, the kids pass through a castle door and return to Derek's backyard. Barney reminds his friends that they can feel like princes and princesses every day at home.

On February 14, 2001, this video was featured in the Blockbuster Exclusive video, Barney's Valentine Adventure (along with Be My Valentine, Love Barney). 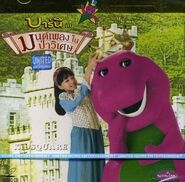 The King with each of the kids 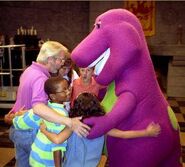 The King and the kids on set