Barney's Musical Castle is is a stage show that was directed and choreographed by Penny Wilson, written by Evan Viola with songs in the show written by various individuals. It was the second national stage show tour (after Barney's Big Surprise) based on the American live-action educational children's television series Barney & Friends. The show made its world premiere on September 15, 1999 at Reunion Arena in Dallas, Texas.[1]

Produced by Lyrick unit Leach Productions, the show toured in North America until 2001 and was nationally sponsored by Luvs.[2] The show was announced to play in eighty cities over the course of the original run. During the show's original run, it drew more than nine hundred ten thousand attendees to two hundred forty-three performances and saw $17.5 million in ticket grosses.[2] Following North America, It was later performed in Asia in 2005, moving to the Middle East in 2006, Chile in 2006, and San Juan, Puerto Rico in 2007. A portion of the proceeds from the tour benefited the National Children’s Alliance, a nonprofit organization dedicated to eliminating child abuse.[3]

On March 6, 2001. Barney's Musical Castle was released on home video having the show filmed at the Rosemont Theater in Rosemont, Illinois in March 2000.

The show opens with a Barney plush doll sitting in a sandbox. The announcer announces that this show is made possible by the audience’s imagination. As the music builds up, the Barney plush in the sandbox is pulled behind the curtains with a bigger castle coming onto the stage. During the transition, the “Barney Theme Song” builds and erupts, in which Barney jumps through the castle opening, waving and greeting the audience as he skips around on stage. Seeing the audience makes Barney want to sing, leading into the “Musical Castle Sing-Along Medley”.

After the medley, four children run onto the stage by the names of Penny, Andy, Jessica and Justin, in which Barney introduces to the audience. Wondering what they were doing, the children tell Barney that they were making flags for their sandcastle until a big sign with a castle and legs came by. Andy concludes that the sign possibly wanted to lead them to a real castle. The children then exclaim that they’d like to visit a castle, in which Barney tells them that they have to use their imaginations, leading into the song “Castles So High”. After the song, Barney and the children see The Sign again, and figure out how to communicate with it. After learning how to communicate with The Sign, Barney and the children learn that The Sign wants Barney and the children to follow it, as it will lead them through an enchanted forest and lead them to a real castle.

The gang follows the sign to the enchanted forest, where they notice pretty flowers, queuing the song “What Makes a Flower So Pretty”. During the song, dancing flowers come out on stage and then leave as the song ends. After the song, Barney and the children hear Baby Bop, who was hiding in the flowers. She comes out, greets the audience and then wonders what they’re doing in the enchanted forest. Learning that they’re going to a real castle, Baby Bop decides to join them. After Baby Bop sings “Look at Me, I’m Three”, The Sign shows everyone that the king lost his crown. Barney concludes that The Sign brought them along, so they could return the crown to the king. Soon the sun comes out, and the path to the castle is gone. BJ comes out and declares that they can count on him to help find the path again, leading into the song “You Can Count on Me”. After the song, Jessica shows BJ The King’s crown. BJ notices a note inside the crown that Barney reads. The note tells them to ask the bunny, fox and bear to help them find the path. When finished reading the note, a bunny, fox and bear comes out on stage, leading into the song “Here in the Forest”, with the addition of a skunk appearing later in the song. During the song, the animals help to make a new path, however everyone has to sing one more song to make the path entirely clear, which leads into “And the Green Grass Grows All Around”.

The path is cleared after the song and Baby Bop and Jessica decide to take turns carrying The King’s crown. As they go down the path, they all sing “It’s a Great Day”. After the song, The Sign comes along to tell them that they’re close to the castle. Upon arriving at the castle, they notice The Guard is sleeping. With the audience’s help, they wake up the guard. When the guard wakes up, Barney asks if he could open the door. The Guard tells them that the door is locked and a special song will need to be sung in order to have it opened. They figure out that the song to sing is “If You’re Happy and You Know It” and after the song, the door opens. Due to the door opening slowly, it leads into intermission.

After intermission, Andy, Jessica, Penny and Andy ride horses from the audience onto the stage. When arriving on stage, they decide to put the horses back in the stables.

The curtains open to see the dinosaurs inside the castle with many flags around, leading into the song “Wave the Flags” with Barney encouraging the audience to wave their flags. After the song, everyone decides to look for the king. Penny suggests that he might be hiding in a painting she found. She hides in one herself, making the others want to join in, leading into “Musical Castle Nursery Rhyme Medley”. After the medley, they conclude that he’s not inside any of the paintings but soon wonder if he might be in a suit of armor they see. The suits of armor soon move and dance, leading into "Knights' Dance" with BJ joining in the dance.

After the song, The Sign tells everyone that The King is at the top of the castle. As they decide to go see The King, Jessica gives Baby Bop The King’s crown to carry. Before leaving to see The King, BJ suggests that they dress up in fancy clothes. They then play dress up with The King’s clothes. While dressing up, they sing the “Musical Castle Costumes Medley” with the dinosaurs singing “I Put a Smile On” afterwards. After the songs, they go and see The King and return his crown to him. Because The King has his crown, a celebration begins and everyone sings “Musical Castle Celebration Medley”. Given that The King is no longer sad, he declares that it’s a great day, leading into a reprise of “It’s a Great Day”. After the song, The King thanks everyone for bringing his crown back, leading into the song “I Love You”. Everyone waves goodbye after the song and Barney blows a kiss to the audience.

The show's original vision was from longtime Barney writer Stephen White. The show was turned over to multiple writers in order to put the script together.[6]

Barney's Musical Castle is a live album with songs from the stage show of the same name. The album was released by NEXT International in South Africa. This is the only Barney album to have a soundtrack based on a US live tour released outside the US.

El Castillo Musical de Barney a live Spanish album with songs from Barney's Musical Castle. The album was released in 2000 by Lyrick Studios and Tycoon Music. The soundtrack was soon re-released by HIT Entertainment and Universal Music Group International on July 14, 2009.

Barney's Musical Castle is a book that was released by Scholastic, Inc in 2001 based off the tour of the same name. It was written by Guy Davis and photographed by Dennis Full.

Everyone singing "Here in the Forest", taken from the Asian tour.

Everyone singing "If You're Happy and You Know It", taken from the Asian tour.

Barney and the gang singing "Wave the Flags", taken from the Asian tour.

Baby Bop and BJ singing "Wave the Flags", taken from the Asian tour.

Everyone singing "I Love You", taken from the Middle Eastern tour.

Everyone singing "I Love You", taken from the Latin American tour. 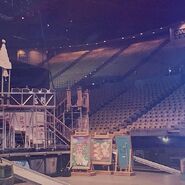 A backstage view of the stage.

The stage show truck used to transport elements of the show.

Barney, Baby Bop, and BJ with the King 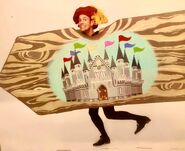