Barney Wiki
Register
Don't have an account?
Sign In
Advertisement
in: Barney Books, 2001, Books Written By Guy Davis,
and 6 more

When Barney and his friends find a crown in an enchanted forest, it's up to them to return it to its rightful owner, the King, in the castle. Along the way, they all dance, sing, and play through the musical castle. 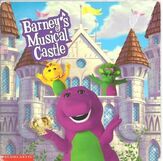