Start a Wiki
Barney's Night Before Christmas is a 1999 direct-to-video Barney Home Video that was released on September 28, 1999.

Robert, Keesha, and Stephen arrive at Hannah's house to give gifts and help with the Christmas decorating. Barney appears and helps the group decorate outside the house and yard. Inside, Barney and the kids, along with Baby Bop, help decorate the living room and trim the Christmas tree. After the decorating is finished, Barney and Baby Bop go outside to play in the snow. Then, BJ appears, pretending to be Santa Claus.  After sharing cookies, Baby Bop asks Barney who fills Santa's stocking. The group agrees that they should fill Santa's stocking with homemade gifts. Upon finishing the gifts, with some imagination, Barney whisks his friends to the North Pole.

While Santa is asleep at his desk, Barney and his friends sneak over to fill his stocking with the gifts. After Baby Bop sneezes, all of Santa's toys start going off, awakening him. Upon friendly greetings, Santa shows the group that all of them have made it on to his 'Good List'. Santa shows the group all of his special collectible, vintage toys before showing them a secret passage to the toy factory.

Entering the toy factory, Mrs. Claus greets the group and takes them on a special train ride through the toy factory. Afterwards, the group agrees to help Mrs. Claus finish some gift wrapping. Everyone returns to meet-up with Santa, where he gives Baby Bop a special music box for thinking of filling his stocking on Christmas Eve. Baby Bop and BJ stay with Santa to join him on his sleigh ride for evening. With some imagination, Barney and the kids return to Hannah's house, where they are greeted by carolers.

Later, Hannah wakes up, too excited to sleep in anticipation for Santa Claus. After playing with Barney a little longer, she falls asleep on the couch. They sing "I Love You" and wish each other Merry Christmas. Hannah's parents bring her up to her bedroom; when, soon after, Santa appears down her chimney.

Australian VHS release (2000)
Add a photo to this gallery 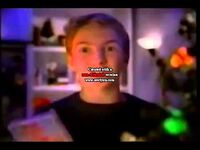 Barney's Night Before Christmas TV spot
Add a photo to this gallery
Retrieved from "https://barney.fandom.com/wiki/Barney%27s_Night_Before_Christmas?oldid=227661"
Community content is available under CC-BY-SA unless otherwise noted.