Barney Wiki
Register
Don't have an account?
Sign In
Advertisement
in: Barney Books, Books Written By Stephen White, 1999,
and 8 more

Barney's Night Before Christmas is a 1999 children's picture book based on the home video of the same name, released August 1, 1999. It was written by Stephen White, who also wrote the video, and illustrated Rick Grayson.

The book was originally released in honor of Barney's 10th Anniversary but was later reprinted without the logo when the anniversary passed under Scholastic and HIT Entertainment.

The friends are gathered at Hannah's house to decorate when Baby Bop has a question - if Santa fills their stockings, who fills Santa's stocking? Barney suggests that they should do it, so they make gifts for Santa and his wife and visit the jolly couple using their imaginations. Santa and Mrs. Claus are thrilled with their gifts and offer the group a tour before they use their imaginations to return to Hannah's house. 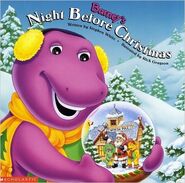