Barney's Pajama Party is a Barney Clip Show that was released on October 30, 2001. It features clips from season five and six episodes.

Put on your PJs and brush your teeth, because it's time to go to a slumber party hosted by one of your best friends! So cuddle up close and get ready for a night full of musical memories courtesy of Barney the Dinosaur. There's pizza, popcorn, muffins, and plenty of your all-time favorite songs. You'll sing the night away as you enjoy moments from past shows. And some special friends might just drop by, too ... like Baby Bop and BJ and Riders in the Sky. So be sure to invite all your pals and don't forget to grab you teddy bear, Barney's Slumber Party is about to begin. 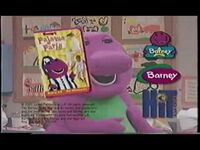 Barney's Pajama Party Preview
Add a photo to this gallery
Retrieved from "https://barney.fandom.com/wiki/Barney%27s_Pajama_Party?oldid=223861"
Community content is available under CC-BY-SA unless otherwise noted.