Barney's Sense-Sational Day is a Barney Home Video that was released on January 14, 1997.

Barney discusses the subject of our five senses, and he encourages the kids to use video to capture everything they see, hear, touch, smell, or taste over the course of a day. When they're done with that, everyone gets involved in making a movie with BJ in the lead, much to his delight. There's only one word to describe this much fun: Sense-Sational! 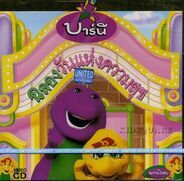