Barney's Space Adventures (Originally known as Aventuras en el Espacio (Adventures in Space)) is a Barney live show that begin touring in South America in 2008. From 2010 until 2012, an English adaptation toured in different countries in Asia.

Barney received a special invitation in the mail! Everyone is invited to the Perfectly Purple Celebration on The Perfectly Purple Planet! Ready to take off, Barney and his friends imagine different colored planets, but the rocket ship doesn't work! Riff comes in and his clapping machine will help make the space ship blast off!

Barney takes his friends on a trip to the Perfectly Purple Planet and that's when they meet The Jester who is clumsy and very silly. On their way to the castle, the gang gets lost and Jacob almost spoiled the surprise. The surprise is for Barney and is to be kept secret.

Finally, they meet King Morado and Queen Purpurina and celebrate at their Perfectly Purple Palace. They sing tons of songs, play lots of games! Finally, Jacob reveals that they have a surprise for Barney! The surprise is letting them know how they'll always be best friends with Barney.

Soon, it was time for them to go, but while getting it, The Jester broke The Clapping Machine. Baby Bop can't wait to go home, but Baby Bop's singing triggers The Clapping Machine to work (Riff accidentally set the machine to singing instead of clapping). They all start singing songs so there rocket can work! The King and Queen thank Barney & his friends for visiting, they give him The Perfectly Purple Key so they can visit anytime they want.

(Some of it may be incomplete and the song list is out of order. In addition, some songs are exclusive between the two productions of the show)

Barney Doll sitting by a rocket before the show 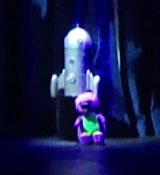 Closeup of the Doll
Add a photo to this gallery

Retrieved from "https://barney.fandom.com/wiki/Barney%27s_Space_Adventures?oldid=224584"
Community content is available under CC-BY-SA unless otherwise noted.