Start a Wiki
Barney's Super Singing Circus is a Barney Home Video that was released on May 16, 2000.

When Emily announces that she can't go to the circus on Saturday because of her family's vacation, Barney and his friends put one on. Barney plays ringmaster, while the children perform in many different acts. Meanwhile, BJ waits for his cannon to arrive, but when it turns out to be too small, Scooter McNutty is the one who gets shot out.

Spanish re-release (2005)
Add a photo to this gallery 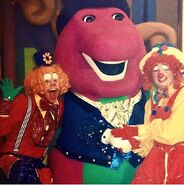 Barney with the clowns
Add a photo to this gallery

Retrieved from "https://barney.fandom.com/wiki/Barney%27s_Super_Singing_Circus?oldid=224939"
Community content is available under CC-BY-SA unless otherwise noted.