44 Minutes
Barney's Talent Show is a Barney Home Video that was released on March 26, 1996.

Barney and the kids put on a talent show, with a big one performing a number of songs with others or solo, and some of the kids getting their moment in the spotlight as well even though Stephen has stage fright by himself. Plenty of great costumes and sets, with songs ranging. Even heavier than usual in its music content, this Barney video will delight kids who like to sing-along. 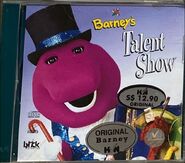 Production for this video took place in October 1995.

On the screener copy: