Barney's Theatre was an attraction at the UK theme park, "Alton Towers" in Staffordshire, England. Three times a day, Barney and his friends, Baby Bop and BJ performed a live show at Barney's Theatre. The theatre was located in the Cred Street (now Cloud Cuckoo Land) part of the park. The Barney theme was replaced by the Tweenies in 2003. Currently, the theatre (renamed the Cuckoo Theatre) is seasonally used for various show productions.

Barney's Playground was a play area for children. It housed three attractions for children of different heights, including a large fun and exciting bouncy castle, with tunnels and compartments full of soft balls and inflatable animals. Like the theatre, it has since been renamed Cuckoo Land Playground (and stripped of all theming).

Barney welcomes his friends (the audience) to the treehouse and leads into a sing along. BJ and Baby Bop join him as the show goes on. 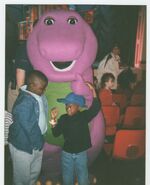 Barney amongst the audience in the Theatre. The Treehouse set is visible in the background
Add a photo to this gallery

Retrieved from "https://barney.fandom.com/wiki/Barney%27s_Theatre?oldid=234386"
Community content is available under CC-BY-SA unless otherwise noted.