Barney Wiki
Register
Don't have an account?
Sign In
Advertisement
in: Barney and the Backyard Gang, 1988, Series

Barney & The Backyard Gang is an American live-action direct-to-video series that debuted in video retailers on August 29, 1988. Produced by The Lyons Group in Allen, Texas, the video series lasted until August 1, 1991 as it was succeeded by its television successor Barney & Friends. Aimed at children from the ages of 2-to-8,[3] the video series was created by Sheryl Leach and co-created by Kathy Parker.

The series focuses on a six-foot purple tyrannosaurus rex named Barney, who comes to life, whenever he is needed, through the imagination of a group of kids, known as The Backyard Gang, springing up from a doll to full size. Together Barney and The Backyard Gang go on adventures through by using their imaginations.

The series made more than $3.5 million. The first three tapes alone sold 50,000 copies and the whole series would end up selling 500,000 copies. The series was a success across the US and Canada, but especially in the creators' native Texas.

In fall 1987, Leach was stuck in a traffic jam thinking about the lack of videos that held the attention of her 2-year-old son, Patrick.[4] At this time, the only preschool aged programs around were Sesame Street and Mister Rogers' Neighborhood, however, they appealed to a larger age range, rather than strictly toddlers. At the time, the only thing that could hold Patrick’s attention was a “Wee Sing” video.[5] This prompted Leach to develop a show herself. Her initial thought was the notice of children carrying snugly security objects, such as blankets and teddy bears. Leach thought the idea of a talking blanket and teddy bear interacting with children were a neat idea, however, the blanket concept was too hard to pull off.

Sheryl Leach proposed a preschool video series, which eventually would be Barney & The Backyard Gang, to DLM, Inc (Developmental Learning Materials). At the time Sheryl Leach was working at DLM, Inc. as a writer. The board she proposed to turned her down. Owner of DLM, Inc., Richard C. Leach, who was Sheryl's father-in-law, agreed to back her with the project with $700,000 of his own money. Sheryl's idea was brought to production at The Lyons Group,

When Sheryl pitched Barney & The Backyard Gang to her father-in-law Richard, he asked that Kathy help to develop the character and show concept. Parker also had a 2-year-old child named Kaitlin. Both Leach and Parker began testing videos on their children, taking notes of what worked and what didn't work, as well as going to different preschools for research. The duo took inspiration from their own childhood programs like Romper's Room, Captain Kangaroo and The Mickey Mouse Club while also combining aspects of the then current kids' programs like Sesame Street and Mister Rogers' Neighborhood.[6]

From their research, around twenty essential concepts were devised, such as using live-action instead of animation so children could better relate, having children as role-models, featuring simple music and having a familiar setting. They also concluded that imagination needed to play a big role, as well as having loving messages.[7]

The bear concept was eventually scrapped due to Leach's son having an interest in dinosaurs after visiting a Science Place exhibit.

After the initial concept was devised, The Lyons Group hired various local production crew personnel to help further develop the show. They hired Irene Corey Design Associates to build the dinosaur costume. After Irene Corey failed to deliver a plushy, huggable T-Rex costume that would be suitable for the producers' needs, producer John Grable reached out and hired friend Jamie Ruth Conner to serve as the series art director and to design a costume that would be more suitable for the character that was being developed.

After Conner's costume designs were approved by Leach and Parker, costume construction by Suzanne Lockridge took place. When Lockridge asked Conner what color to make Barney she replied, "purple of course!" Conner chose the purple, green, yellow color palate simply because that shade of purple happened to be trendy in the late 1980s.

A team was created to create a series of home videos called Barney & The Backyard Gang. The videos were sold directly to the public and became a success.

On Super Bowl Sunday in 1991, executive vice president of programming for Connecticut Public Television,[8] Larry Rifkin, rented the Barney video A Day at the Beach for his 4-year-old daughter Leora Rifkin,[9] which they got from Prospect Video Store, in Prospect, Connecticut.[10] Once they got home, his daughter couldn't stop watching the video. Rifkin tested the video on other children in the neighborhood to make sure the reaction wasn't unusual. Rifkin liked the concept, so he spoke with Leach and other creators about putting Barney on television. At the time, the Corporation for Public Broadcasting had been looking for something new, educational and lively to supplement the programs that were already on television.[11]

In June of 1991, it was announced that Barney would have a new show debuting on PBS with a scheduled release for April 1992 with thirty episodes.[12] A $2.25 million grant was given to The Lyons Group and Connecticut Public Television to produce the new show. One of the changes announced for the show was dropping the word "gang" due to it having negative connotations.[12] In October of that year, production began on the new television show, titled Barney & Friends.

At the time, the crew was considering using one person for both the body and voice of Barney. Bob West was was initially cast as the body and voice but he was too tall for the costume they'd already started making.[15] David Voss was brought in to fulfill the costume. In 1990, Voss entered the military as a Cavalry Scout where he was based in Mannheim, He was succeeded in the role by David Joyner.

For Michael and Amy's mom, crew members considered having actresses Marlo Thomas and Phylicia Rashad to portray the role.[7] Actress Sandy Duncan was ultimately chosen for the role. John Grable, one of the directors of the video series, flew up to New York during development and had several phone calls with Duncan and her agents to negotiate with and convince her to join the cast. of the show.

Music for the first three Backyard Gang videos were done by Stephen Bates (Baltes) and Lory Lazarus. The duo eventually left as they didn't believe the show would go anywhere. The music was eventually fulfilled by Bob Singleton, who was the music director and a songwriter, and Philip Parker, who was also a songwriter.

Related merchandise to the Backyard Gang videos include read-along books (of the first three videos) and tape sets (of the entire series), and later in the series, the first Barney dolls (two of them actually used in the videos). 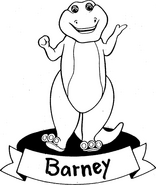