25 minutes
Barney was the theme park attraction theme in Cred Street (now The World of David Walliams) in the theme park of Alton Towers in Alton, Staffordshire, England. Based on the children's television show, Barney & Friends, the theming was best known to feature an indoor playground called "Barney's Playground" and a daily sing-along show in "Barney's Theatre", with the characters of Barney, BJ, and Baby Bop that played three times a day.

The sing-along show featured the voice of Duncan Brannan, who was one of the voice actors who provided the voice of Barney after the retirement of Bob West in 2000. The attraction also featured the original voices of Baby Bop and BJ, Julie Johnson and Patty Wirtz, respectively.

The theming began on April 1, 2000,[2][1] replacing the former theme of Children's World, and lasted until 2002. Scheduled to only appear in the park for three years, the Barney theme was replaced with a theme based on the British live-action children's show, Tweenies, on April 5, 2003.

Before the theming of the area, Barney performed at the theme park in Easter. Barney and his friends returned and had a successful summer appearance in the theme park in 1999, before officially having a permanent attraction spot there. The Barney theme was announced and scheudled to stay in the park for three years. The Barney theme was replaced with a theme based on the british live-action children's show, Tweenies, on April 5, 2003[1] , and continued performing there until the end of the 2005 season.[1]

Barney welcomes his friends (the audience) to the treehouse and leads into a sing along. BJ and Baby Bop join him as the show goes on. After the show, children and families were able to meet Barney.

Barney's Playground was a play area for children. It housed three attractions for children of different heights, including a large fun and exciting bouncy castle, with tunnels and compartments full of soft balls and inflatable animals.

The entrance to Barney's Theatre.

The entrance to Barney's Playground. 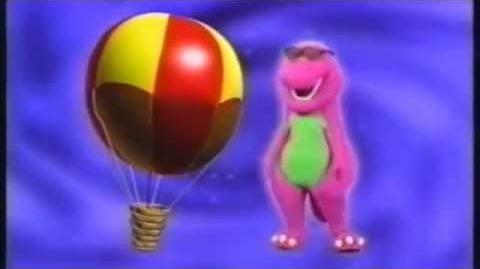