Barney Wiki
Register
Don't have an account?
Sign In
Advertisement
in: Barney Videos, Barney and the Backyard Gang, 1990

Barney Goes To School is the sixth video[1] in the Barney & The Backyard Gang series, originally released in August 1990.

Join Barney as he enjoys a typical day at school with the Backyard Gang. And joining them in finger-painting, pretend, and learning such center activities as ABC's and 123's (not to mention scampering after a mischievous hamster named "Zippity"), he discovers why the kids love going to school each weekday - learning is so much fun! 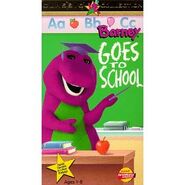 Tina and the Barney doll in her backyard (1990)