Barney Goes to School is the sixth video in the Barney & the Backyard Gang series, originally released on August 1, 1990.

Join Barney as he enjoys a typical day at school with the Backyard Gang. And joining them in finger-painting, pretend, and learning such center activities as ABC's and 123's (not to mention scampering after a mischievous hamster named "Zippity"), he discovers why the kids love going to school each weekday - learning is so much fun! 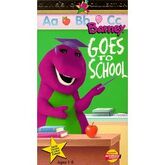 Final Rerelease (1996)
Add a photo to this gallery

Audio cassette
Add a photo to this gallery

Retrieved from "https://barney.fandom.com/wiki/Barney_Goes_to_School?oldid=221304"
Community content is available under CC-BY-SA unless otherwise noted.