Barney Live! In New York City (Originally titled Barney Live! At Radio City) is a Barney live show that was performed at Radio City Music Hall in New York City from March 5-13, 1994. The show marked being Barney's second major stage show after Barney in Concert (1991). It was later released on video (filmed at the same location) on August 3, 1994, which became the first Barney video in the Classic Collection series.

The show opens with the announcer announcing Barney on stage, but as the curtain opens, Barney is nowhere to be seen. Then, a kid explains over the loudspeaker that the only way to make Barney appear is to use your imagination. The announcer tells the audience to imagine, and announces Barney again. Barney's theme song then starts playing as a white smoke cloud appears on stage. Then, Barney arrives, much to the audience's delight. Then, after greeting the audience, Barney sings "The More We Get Together" before thanking the audience for coming to play. He then introduces Kathy, Julie, Derek, Carlos, Kelly, Tosha, Min, and Shawn, before they all encourage the audience to get up and dance to "Mr. Knickerbocker".

Then, Barney decides to head with the kids to the backyard to go and play. The curtain opens to reveal a playground with a slide, a sandbox, a swingset, and a clubhouse. Then, Barney and the kids play "Ring Around the Rosie", before they hear the sound of a tricycle bell. It turns out to be Baby Bop riding her tricycle to join Barney and the kids! She admits that there are a lot of friends in the audience (and that there are much more than 10). Then, Baby Bop takes out her blankey before the kids surprise her. After that, Baby Bop sings "My Yellow Blankey" before the kids get an idea to make something for the audience: a special surprise! They all work together to make their special surprise for the audience using items from "The Barney Bag". But before they are able to share it, a new visitor, The Winkster, sneaks away with the bag! After the Winkster introduces himself through song, Barney, Baby Bop, and the kids catch him with the bag, and then give chase. Barney and his friends are going to need lots of help to catch the Winkster. So Barney asks the audience if they can help them. Fortunately, the audience agrees to help. Then, Barney tells the audience to point and shout "There he is!" whenever they see the Winkster. Just then, the Winkster shows up and the gang starts chasing him. But the Winkster is too fast, and they can't catch him.

The Winkster then says "Time for me to go bye-bye! But I'll be back!" and speeds away, the kids remark him as silly. Then Barney and his friends sing "She'll Be Comin' Round the Mountain" before Baby Bop comes in and says "Toot, toot!" Just then, they all hear someone whistling a tune. BJ zooms in on his scooter to join the party, and sings his very own song. Then they all decide to play baseball while singing "Take Me Out to the Ball Game", but just then, it starts to rain, ending the game. The kids want the rain to go away, but Barney seems to be enjoying it as he dances around. He then cheers the kids up with "If All the Raindrops", and then they all join in. The rain then stops, and then they sing "The Green Grass Grows All Around" and meet a cute little bird. Then they hear a marching band coming before seeing BJ and Baby Bop leading the band. Then the kids grab some instruments and perform "I Am a Fine Musician". Then everyone marches around as Barney tells the audience that it's time to take a break, and to stay tuned. Then they all march to the circus.

After the intermission, Barney appears dressed as a ringmaster, welcoming the audience to "Barney's Imagination Circus". Then the kids arrive dressed as fun-loving clowns singing "Boom Boom, Ain't it Great to be Crazy?" before Barney then asks them if they got to the circus in Kelly's clown car. Derek then reveals that they actually got here on the "Clown Bus". It turns out that he was right! BJ and Baby Bop arrive on the bus and sing "The Wheels on the Bus" before Baby Bop decides to do an act on her own. She sings "Three Little Monkeys" with the help of Doctor Shawn. Then, Barney and the kids meet a real live elephant, and sing "Do Your Ears Hang Low". Just then, some clowns bring a dumbbell and drop in on Baby Bop's blankey! "Derek the Incredible" comes to help get the blankey back, but can't seem to be able to lift the dumbbell, much to Baby Bop's dismay. She then lifts the dumbbell herself and throws it high into the sky. The audience cheers for Baby Bop, and then Barney announces that it's time for a flight in an airplane. BJ comes in as an airplane pilot, and he joins Barney and the kids in singing "Flying in an Airplane". After that, Kathy sings "Me and My Teddy", and dances with some dancing bears. Then, Barney sings "Four Little Ducks" with the kids dressed as ducks. Then, BJ arrives as "BJ the 'Human' Cannonball". He then explains his act, before pushing the button on his remote control, causing the act to go horribly wrong, as the Winkster flies out of the cannon, ending the circus with another chase.

The kids chase the Winkster across the stage, but Barney thinks he can catch him. He soon ends up making a wrong turn as he ends up all the way across from the Winkster, who laughs and makes fun. The Winkster then heads on stage to boast to the audience that it's impossible to catch him. Barney and the kids then sneak up on him and almost catch him, but the Winkster speeds through the curtain. The kids think that it's hopeless, and that they'll never catch the Winkster. But Barney thinks that they'll get an idea if they're all happy. He then cheers the kids up by singing "My Aunt Came Back". Then they head back to the backyard to play London Bridge with BJ and Baby Bop. Then they realize that it's getting dark. They then all get together to sing "Twinkle, Twinkle, Little Star" before Baby Bop makes a wish on a star. They then hear the Winkster doing the same.

The Winkster then confesses that he took the bag in order to make friends. Barney and the gang forgive him for his misdeeds and remind him that he just needs to ask to be friends. They then sing "Please and Thank You" and the Winkster gives the Barney Bag back, much to everyone's delight. Barney then unveils the surprise to the audience: a glittered stuffed heart. The Winkster thinks that the stuffed heart will need to be bigger to share with everyone. So Barney puts the heart back inside the bag. He then asks everyone to use their imaginations to help make the heart bigger. Suddenly, a giant version of the stuffed heart lowers down to the stage for everyone to see! After the unveiling of the bigger heart, Barney, BJ, Baby Bop, Winkster, and the kids wrap up the show by thanking the audience for their help, and singing "Everyone is Special" before taking a bow with the whole cast. Barney then appears from the curtain, forgetting one last thing: a kiss goodbye. He then blows a big kiss to the audience, before saying goodbye, and heading back to join his friends, bringing the show to an end. 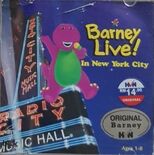 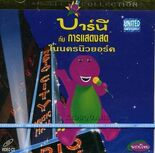 Barney and Baby Bop rehearse for the show

BJ and the other cast members at dress rehearsal. Trivia: Notice there are two Barneys in this image.

Barney and the cast rehearsing for the finale

David Voss and Ashley Wood portray as The Winkster character.

The main cast at rehearsal

Barney sings "The More We Get Together" in front of a big crowd.

Look! There he is! The Winkster's taking The Barney Bag.

Batter up! Barney and his friends play baseball.

After a rain, Barney and the children sing "And the Green Grass Grows All Around".

They're all such fine musicians; that's what people say!

Everyone's clowning around at the circus singing "Boom, Boom, Ain't It Great to Be Crazy?".

Everyone plays and sings "London Bridge".

Everyone teaches The Winkster to use good manners.