Barney Live! World Tour - A Celebration! is a live stage show produced by Life Like Touring, under license from HIT Entertainment. It was directed by Troy Sussman. It started on July 23, 2015 in the Western Region of the United Arab Emirates, with stops in Abu Dhabi and Bahrain later that summer.[1] The show later performed in Saudi Arabia from December 7 - 30, 2017. This show then performed in Yanbu from February 22 - 24, 2018 and later performed in Jazan from March 1 - 3, 2018.

Cousin Riff has sent Barney a very special package in the mail – a beautiful globe of the world! Barney, BJ, and Baby Bop must use the globe and follow the clues to find Cousin Riff and a list of very special items! As Barney and his friends travel to France, Japan, India, China, and Mexico, they have a terrific time learning about language and culture in each new country. [1] 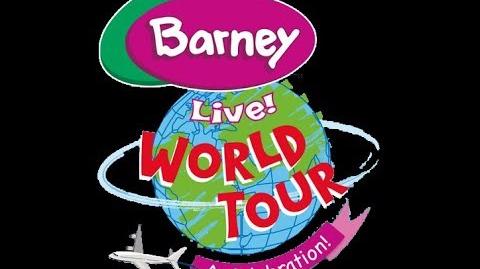