Barney Live in Concert - Birthday Bash! is Barney's seventh and final stage show and a live stage show tour (after Barney's Big Surprise, Barney's Musical Castle, Barney's Colorful World!, and Barney Live! - The Let's Go Tour) that was produced by VEE Corporation, along with HIT Entertainment.[1] The show opened on November 19, 2010 in Tulsa, Oklahoma and has toured the US and Canada. The show completed its tour on December 11, 2011. It soon started its tour in Asia in 2014.

Barney comes to life and his friends join him not too long afterwards and get the crowd going. When asked, Barney hasn't decided on a birthday wish, a point that comes back up later in the show. Through out the show, Barney and friends celebrate the purple guy's birthday through singing songs, playing games, and decorating the stage (in Act 2), often playing clips of kids suggesting ideas. Meanwhile, BJ attempts to pull a rabbit out of his hat, pretending to be a magician (and later, a rock star back from his "world tour."). While the "kids" get their party hats, Baby Bop, BJ, and Riff sing what they like about their purple friend. In return, Barney sings how he'll be "Someone to Love You Forever." The cast celebrates Barney's birthday and the purple guy reveals his wish: "I wish that our friendship will never end. And it never will, as long as you remember I'm always here, just as close as your imagination." Like with most Barney shows, the cast wraps up the show singing this song, "I Love You", and finally, Barney blows out the birthday candles (shown on screen) on his cake.

The ensemble cast consists of a group of four actors and actresses. In case one (or two) of them can't perform, the others can cover for them. The human cast only has two named characters.

The rest of the ensemble used their own names. The four ensemble members also cover for the actors playing the dinos.

Barney Live in Concert - Birthday Bash!: Original Cast Recording was an album that featured songs from the stage show of the same name. It was released in 2011 and it was only available for purchase at the show itself. It was never sold at retail unlike previous soundtracks based on Barney live shows. 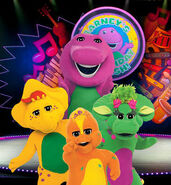 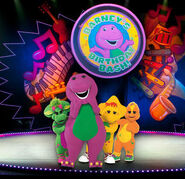 The stage for Barney Live in Concert

Baby Bop playing the fiddle in the "Clapping Song"

Barney's always "Someone to Love You Forever"

Barney with his cake

If You're Happy and You Know It

BJ and Baby Bop ("Throw Your Hands Up")

"BJ the Grape"/"BJ the Great" fails at magic

Our Friend Barney Had a Band

"BJ the 'Grape'" messes up once more, complete with confetti

Barney and co teach The Dino Dance to the audience

BJ, back from his "World Tour" (A Rock N Roll Star)

"Together, together. Working together...."

Barney sings about the colors around us

The cast enjoys a hoedown with The Clapping Song

"If all the raindrops were lemon drops and gumdrops. Oh, what a rain that would be..."

BJ, Baby Bop, and Riff sing about what they like about their purple friend

"...When you reach out to me, I will always be someone to love you forever..." 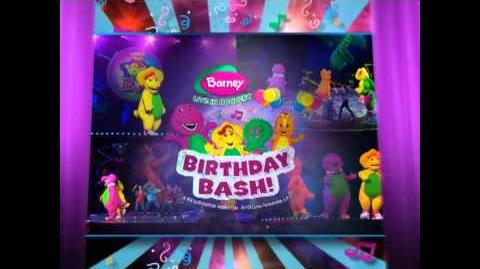