Sometimes in popular culture or in movies or TV shows, there were references to Barney or even clips from a Barney video or Barney & Friends episode.

In the season 2 episode "Money, Beakmania, and Water Power," Lester the Rat (played by actor Mark Ritts) shares the following magazine article with the title character's assistant Liza: "Barney the dinosaur is telling close friends that he is 'purple and green with envy' over Lester the Rat's growing popularity."

There was an blue dinosaur enemy in Rickety Town, who is a parody of Barney named "Carnie".

Sonny: "Not that Barney. A different Barney. A more expensive Barney."

While ranting about Smoochy the Rhino's return, Rainbow Randolph calls him a "bastard son of Barney" among other insults.

The Digimon ExTyrannomon (Japanese: エクスティラノモン Ex-Tyranomon) is most likely based on Barney the dinosaur. In addition, Barney is also referenced in the English dub of Digimon Tamers in the form of a character watching Bernard the Dinosaur.

In the episode Enrique goes to Dragon Land without Emmy and Max they're at school, Enrique arives back from Dragon Land and he asks Emmy and Max how was school and they says their catchphrase.

In the episode "A Tale of Two Cows," Barney the dinosaur (as a medic) is present at Toot's amputation scene. However, he is colored blue instead of his usual purple (likely for copyright reasons).

The poster for Barney's Great Adventure is seen.

The poster for Round and Round We Go is seen.

Gertie places the Barney's Beach Party VHS on the counter wanting to rent it.

September 2013 - Jimmy Fallon & Justin Timberlake show you what a Twitter conversation sounds like in real life. Jimmy mentions how he's been watching alot of Barney the Dinosaur with hashtags following his statement referencing Barney.

The Tonight Show With Jimmy Fallon

May 20, 2015 - Jimmy Fallon and Jamie Foxx play Wheel of Musical Impressions. When it was Jimmy's turn, he had to impersonate Barry Gibb while singing "I Love You".[1]

February 2019 - Jimmy challenges Rebel Wilson to take turns singing as many songs as they can think of without hesitating to go with a random beat played by The Roots. Jimmy then starts to repeat the words "I Love You", not knowing of a song to sing. Wilson in return says that I love you is not a song. QuestLove suggests that he could sing "I Love You" from Barney, with the segment closing out with them singing.[2]

In Weird Al Yankovic's song "Jurassic Park", Weird Al claims that some of the dinosaurs "sure don't act like Barney" while the purple dinosaur has a run-in with the T-rex.

In Jurassic Park III, Charlie watches "Barney's Musical Castle" on the TV in his room while the Kirbys have an encounter with the Spinosaurus. Ironically, Trevor Morgan stars in the movie while he played the part of Cody a few years before in "Barney's Great Adventure".

In the episode Brain-A-Rooney Liv (played by Dove Cameron) says their oulfits are like being between "Barney and A NASCAR driver."

In season eleven, episode fifteen, a would be Dinosaur Park owner, enlists the help of two scientists to revive a T-Rex... unfortunately for him the dinosaur is much more genial than typically thought as, as he loves singing and giving hugs. The dinosaur, named Terry the T-Rex is a direct parody of Barney.

In the episode " Ransom " Timberly's doll "Wally The Alligator" gets stolen so Gerald and Arnold try to find it, only to find out she was the thief. Wally, like Barney, also has a television series, which has the following theme song:

In the episode "iCarly Saves TV", there is a character named Zeebo, meant to be a reference/spoof off of the character Barney, despite him being a dragon. In that episode a TV network producer made Zeebo because " of test research showing that kids love dinosaurs", referencing the popularity of Barney.

Blarney the Dinosaur is a minor character who appears in an episode of The Loud House and who is mentioned briefly mentioned in some episodes as well. He is a direct parody of Barney as he likes to sing and entertain children.

Barney's Titanic Adventure was a skit performed in 1998, placing Barney on board the RMS Titanic. The name combined Titanic and Barney's Great Adventure, the latter of which was released at the time. In the end, Barney falls victim to the sinking, to vigorous applause from the audience.

In the episode "Being Mrs. Leadready," Barney's catchphrase "super-dee-duper" is mentioned.

Barnaby the Dinosaur in The Mask: Animated Series.

Unnamed Barney the Dinosaur Parody in Beavis and Butt-Head.

Unnamed Barney the Dinosaur Parody in The Critic.

Humphrey the Hippo in The Critic.

Blarney the Dinosaur in The Loud House.

Terry the T-Rex in All That. 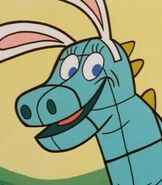 Blarney the Sea Serpent in The Powerpuff Girls.

Barney in Drawn Together.

Smoochy the Rhino in Death to Smoochy.

Wally The Aligator in Hey Arnold.

Barney the Dinosaur in The Simpsons.

Homerzilla as Barney in Treehouse of Horror XXVI.

Sydney the Pink Dinosaur in Garfield and Friends. 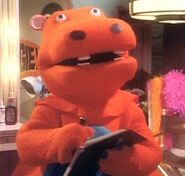 Blarney the Dinosaur in Blarney - It Ain't No Picnic.

Barney Doll in The Simpsons.