Barney Wiki
Register
Don't have an account?
Sign In
Advertisement
in: Barney Videos, Barney and the Backyard Gang, Barney Stage Shows,
and 2 more

46 Minutes
Barney in Concert is the seventh video in the Barney & The Backyard Gang series, and Barney's first ever stage show. The concert took place at the Majestic Theater in Dallas, Texas on March 14, 1991, and it was released on video four months later, on July 29, 1991.

The audience gets settled in before they hear a voice saying the magic words, "Shimbaree, Shimbarah". Then, out of nowhere, sparkles start appearing onstage before Barney jumps out of the curtain, making his grand entrance. He dances to his theme song, before he welcomes the audience. Then, he sings a song to tell them how excited he is to have them join him, and show them how special they are. Then, he decides to introduce them to the Backyard Gang. The curtain opens to a set with all sorts of gift boxes everywhere. The Backyard Gang arrives and they introduce themselves through a rap wearing yellow T-shirts with black words for the names, yellow socks, blue shorts, and white shoes.

Then, Michael encourages the audience to join in with a special song. After that, Barney and Tina make farm animal sounds and sing "Down on Grandpa's Farm" with the help of animals in costume. Then, Barney joins the kids to sing "The Noble Duke of York".

Barney and Derek sing "Pop Goes the Weasel" before Barney has help from Michael and Luci to get some Hebrew and French kids on stage to sing "The Alphabet Song" in English, Hebrew, and French.

Then, Luci sings "Where is Thumbkin?", followed by giving Barney a surprise: a camel named Sally.

After that, Barney does the Barney Shake to reveal a special surprise. Just then, the box opens to reveal a green triceratops with a pink bow in her hair, and a yellow blanket. Barney shushes the audience and tells them not to tell the Backyard Gang about the surprise. Then, Barney and the kids sing "Mr. Knickerbocker", but after the song ends, the triceratops comes out of the box again. The kids are surprised to see this and want to know more about the dinosaur. Adam gets an idea to sing the song again after noticing that the dinosaur came out when she heard the song. So they sing the song again, but this time, the dinosaur dances out of the box. After the song, the dinosaur hides behind Barney and gets shy. The kids realize that she doesn't have a name, so they huddle up and think of a name. What gives Amy an idea is seeing the dinosaur's dance moves. So Amy decides to name her Baby Bop, and the other kids agree. Then, Amy decides to have Baby Bop show off some dance moves. Baby Bop dances to some street music, which impresses everyone.

Then, Baby Bop gets the confidence to join the show, and she sings "The Itsy Bitsy Spider", and meets a spider puppet. Barney and the kids then sing a bubble bath song with audience participation, but the bath is interrupted by the sound of a firetruck. Baby Bop and some of the kids are dressed as firefighters and they sing "Hurry, Hurry, Drive the Firetruck".

Barney appears as a railroad engineer, and talks about pufferbellies. Then, he sings "Down By the Station". Then, he grabs an American flag, and he is joined by the entire cast to sing "You're A Grand Old Flag".

Then, Barney heads to the front of the stage to tell the audience that the show is about to end. But he does explain that he's always going to be there for everyone. Then, he encourages the audience to hold hands to sing "I Love You". Then, everyone bids farewell to the audience before Barney appears from the curtain and blows them a kiss goodbye, ending the show. 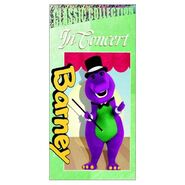 Barney, Tina, and the Cow performing "Down on Grandpa's Farm"

The Spider from "Itsy Bitsy Spider" 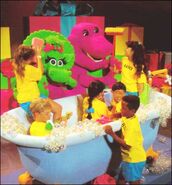 Barney, Baby Bop, and the Backyard Gang playing in the bathtub