available at the chain under the "Kidmongous" line. These special were released from 1998 until 2003, though Blockbuster had previously sold non-exclusive Barney videos before that and continued to do so until its closure.

Listed in the parentheses are the videos contained on each tape.

Barney's Time for School (Barney Let's Play School! and It's Time for Counting)

Barney's Learning Round-Up (A to Z with Barney, Parade of Numbers and Howdy Friends)

Going Places With Barney (You Can Be Anything! and Walk Around the Block With Barney) 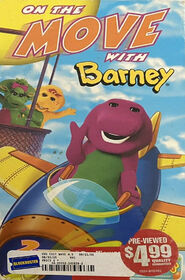 Barney: Sing-Along Fun! (Barney Songs From The Park and More Barney Songs)
Add a photo to this gallery

Retrieved from "https://barney.fandom.com/wiki/Blockbuster_Video?oldid=231922"
Community content is available under CC-BY-SA unless otherwise noted.