Facebook
Instagram
TikTok
Twitch
Twitter
Website
YouTube
Robert Matthew "Bob" West (born June 25, 1956 in Finleyville, Pennsylvania) is an American voice actor and graphic designer, who is best known as the original voice of Barney from 1988-2000 in the PBS children's television series, Barney & Friends, and he was later succeeded by many others in the role of the voice. Bob West, a native of Pennsylvania and he grew up in Baytown, Texas, is also known for voicing Pasqually and Jasper for Chuck E. Cheese, which he both voices them in 1986 until 1998.

Bob West went to Ross S. Sterling High School and studied art at Trinity University. After 3 years of study under Robert Tiemann, Robert West graduated from Trinity in 1978, then stayed for an additional year of post-graduate studies.[1]

Bob West's first gig (not counting the singing telegram work) was serving as art director and camera operator for a commercial production company while simultaneously launching a parallel career in voice over. In 1995, he began providing web design services, building sites for clients in a variety of industries, including film and entertainment professionals and artists.[3]

Bob West auditioned for Barney back in 1987. As he recalls, "I didn't get the description until a few minutes before the first audition (and no drawings?), so I had to pretty much create it on the spot, which is common [for voice actors]. There was at least one callback audition, I think and the voice was adjusted a bit, as it was before and during early production. At the time, they were also considering using one person for both body and voice, but I was too tall for the costume they'd already started making." Since then, Bob West's voice for Barney has changed over the years. Bob West's voice was not only used in the Barney & The Backyard Gang videos and on the Barney & Friends television show, but also on a 70 market radio show, on Multi-Platinum and Multi-Gold albums, for a feature film, for CBS and NBC primetime specials, as a Daytime Emmy presenter, for toys, for educational games, and for live tours and "personal appearances." In addition, he provided Barney's voice for interviews on The Today Show, Live With Regis & Kathy Lee, Oprah, The Phil Donahue Show, John & Leeza, Marilu, and appearances around the world.[4] In 2000,  Bob West retired from doing the voice of Barney and he was succeeded by Duncan Brannan, Tim Dever, and later, Dean Wendt.

Bob West would later become a graphic designer for the shows, "Speechless" and "The Muppets", which both aired on ABC.

Honors and accomplishments include various voice over awards; being asked by Congress to testify on the issue of email spam and the unauthorized sharing of personal information; selection for archiving by the Library of Congress of a self-produced, 9-11-related website; and setting an unofficial world altitude record for bungy jumping from a helicopter.[3] 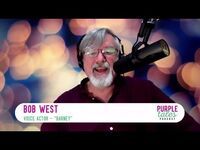 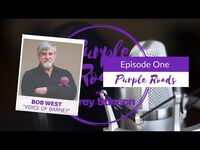