Can You Sing That Song? is a Barney Home Video that was released on December 13, 2005.

Live from your imagination, it's time to sing lots of your favorite songs with "Barney's Musical Game Show"! Barney, Baby Bop and BJ can't wait to play in this day of interactive musical challenges. There are songs to sing, clues to colves and surprises from some fairy-tale friends. With Barney, the name of the game is fun!

Stage left view of the set 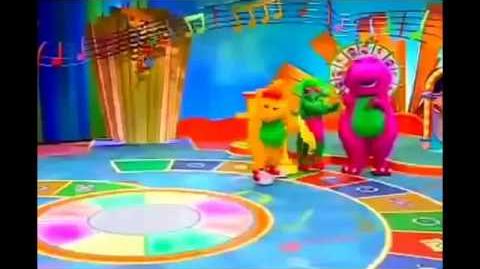 Barney- Can You Sing That Song? Trailer
Add a photo to this gallery
Retrieved from "https://barney.fandom.com/wiki/Can_You_Sing_That_Song%3F?oldid=224880"
Community content is available under CC-BY-SA unless otherwise noted.