Start a Wiki
Cats and Dogs Our Furry Friends is a Barney & Friends Episode Video that was released on VCD and DVD in Asian regions. 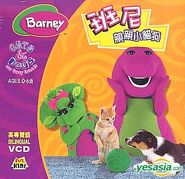 2006, Hong Kong (DVD), Intercontinental Video
Add a photo to this gallery
Retrieved from "https://barney.fandom.com/wiki/Cats_and_Dogs_Our_Furry_Friends?oldid=226724"
Community content is available under CC-BY-SA unless otherwise noted.