After Baby Bop accidentally makes a mess in the classroom, Barney and the kids help clean up so that Mr. Boyd doesn't miss his concert. 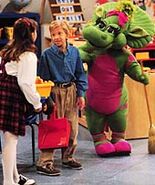