Marisa Kuers
Hannah Morgan is a character who appeared in Seasons 4-6 of Barney & Friends. She was played by Marisa Kuers.

Hannah lives with her mom and dad in a house made of bricks; and she has an aunt named Paula and Grandma Johansson, who lives on a farm. She has no siblings, as revealed in "You Are Special" and also implied in "Barney's Night Before Christmas", considering that none of them are seen in this episode. Also, according to "Barney's Night Before Christmas", Hannah's last name is Morgan.

Hannah's favorite color is blue, and she enjoys dancing, collecting rocks, dolls, playing the piano, riding a horse, helping her mom cook, and spending time with her best friend, Emily. She has a favorite doll named Annie. One of her favorite snacks is teddy bear toast.

The following list are videos that show previous footage of the character.

Hannah in Camp WannaRunnaRound, which is also her first appearance

Hannah and BJ in Camp WannaRunnaRound 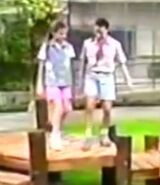 Chip and Hannah are hugging each other.

Hannah in her red shirt and denim dress 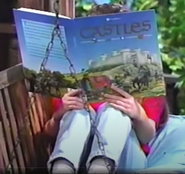 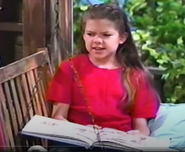 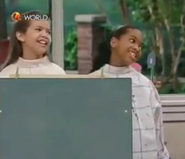 Hannah and Ashley painting a picture 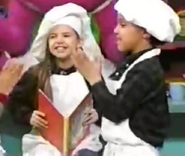 Hannah in Barney's Night Before Christmas

Hannah in her pajamas

Barney singing I Love You to Hannah