Sheryl Leach (exec.)
Dennis DeShazer (exec.)
Jill K. Hance (associate)
David Bernard Wolf[2]
Happy Holidays Love, Barney (Happy Christmas Love, Barney in the United Kingdom) is an album that was released on CD and cassette on September 30, 1997, distributed under the music division of Lyrick Studios. It was later re-released in 2003 under Koch Records.[3]

On April 10, 2020, the album was transferred to Warner Music Group's Arts Music division, along with other Barney albums, as Mattel entered into an exclusive, multi-year global music licensing agreement between the company, announced on May 1, 2020.[4]

Happy Holidays Love, Barney is the sixth album released by the purple dinosaur and is the first holiday themed album in the franchise, but the second Christmas cassette, after "Waiting for Santa". The holiday album soon to come would be Feliz Navidad con Amor Barney.

At AllMusic, Ross Boissoneau rated the album two and a half stars out of five, saying that Happy Holidays Love, Barney is "Strictly for fans" as most of the album features traditional Christmas and holidays songs. However, Boissoneau stated that the arrangements are "snappy".[8] 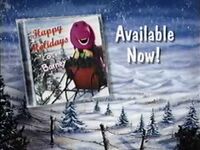