Start a Wiki
I Love You Barney is a singing Barney plush doll. When the heart button on his tummy is pressed, he sings the song "I Love You". Several versions of the toy have been sold throughout the years.

While the official I Love You Barney sold fairly well throughout the years, knockoff versions of the plush are easily available on online retailers such as eBay and Amazon. Sutble differences can be seen below.

Official I Love You Barney toys have hearts that read "I Love You" on its tummy. The song played would either be Bob West or Dean Wendt's Barney voice. These toys also notably came in boxes and had different tags on the hand that read "Press my tummy for me to sing "I Love You"".

Most of the knockoffs used earlier, Bob West recordings in poorer quality, with some lacking a voice box at all. Some of the knockoff toys lack the heart symbol, and instead used the Barney's Colorful World logo instead, with some missing the logo entirely. Differences go further, including fisher-price tags, the name being on the wrong foot, and flashing lights within the plush. 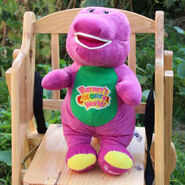 Knockoff with the Colorful World logo 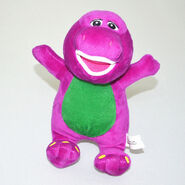 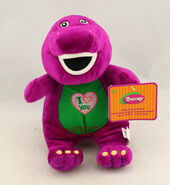 Knockoff with false Barney tag
Add a photo to this gallery
Retrieved from "https://barney.fandom.com/wiki/I_Love_You_Barney?oldid=226803"
Community content is available under CC-BY-SA unless otherwise noted.