Start a Wiki
I Love to Sing with Barney is the eighth US studio album from Barney, released on CD and cassette on January 12, 1999 under Lyrick Studios. It was soon re-released by Koch Records and HIT Entertainment in 2003 along with previous Barney albums.

The album was released the same day as Sing and Dance with Barney both celebrating Barney's 10th Anniversary.[2]

After the year of the album's release, it commercially went on to peak at number seven on Billboard's Top Kid's Albums on May 6, 2000.[3] 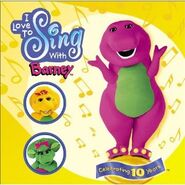 Cassette Release/Re-Release (1999)
Add a photo to this gallery

Credits for I Love to Sing with Barney adapted from AllMusic.

Retrieved from "https://barney.fandom.com/wiki/I_Love_to_Sing_with_Barney?oldid=228422"
Community content is available under CC-BY-SA unless otherwise noted.