47 Minutes
Imagination Island (Titled Bedtime with Barney: Imagination Island in its initial broadcast) is a 1994 NBC Primetime TV special spun-off of Barney & Friends. It originally aired on NBC on April 24, 1994. It was later released on home video on October 4, 1994.

Min and Tosha are having a sleepover; and Tosha's mom reads them a story about a mystical place called "Imagination Island" unable to finish the story. When Barney comes to life, he shows the two girls that they can go on a sailing adventure if they use their imaginations. With that, Barney mystically takes the two girls on deck aboard a huge ship destined for Imagination Island. Along the way, they meet up with Shawn, Derek, Baby Bop, and BJ. As the ship sails closer to the island, a big storm causes a huge tidal wave to knock the ship up onto some palm trees on the island.

While Baby Bop and BJ stay on the ship, Barney and the children go explore the island. After hiking through the island's jungle, they eventually find a tropical house where they meet Professor Tinkerputt, a toy inventor who doesn't like to share his creations. He explains to the group the he moved to Imagination Island to be alone with his toys.

The professor shows the group his new balloon maker that does not properly work. After Tosha realizes that her heart-shaped locket is the key to make the machine work, she gives the professor her locket. Through the process, Barney helps him understand that sharing with others makes people happy. By finally sharing different toys with the group, the professor realizes that making other people happy makes him happy too. Wanting to leave the island himself, Tinkerputt agrees to help the explorers get off the island. After a moment of thinking, Tinkerputt gets an idea of how to get the ship out of the trees. They can fly back with help from his balloon machine.

The group returns to the ship where Tinkerputt inflates many balloons to attach to the ship. Tinkerputt takes control of the ship, and the ship flies up to the sky. Baby Bop and BJ return home, and Barney reminds the kids the importance of home.

Later, the ship reaches back home, and Barney and the kids leave. With Tosha and Min falling asleep, the ship sails off into the night sky with the professor heading to build a new toy factory.

Julie Johnson was not on set during production due to an off Broadway gig she received at the time the video was being filmed. Carol Farabee replaced Julie Johnson as the voice but soon later returned to dub over Carol Farabee's lines, due to the NBC network wanting the continuity to continue from the television series.[1]

Production for this TV special/video took place in February 1994.

On April 12, 2002, this special was featured in the Blockbuster Exclusive video, Barney's Island Safari (along with Let's Go to the Zoo). 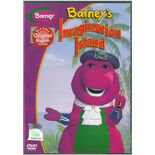 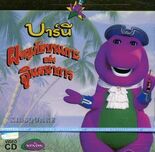 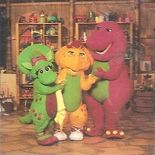 Barney on set with Professor Tinkerputt and the kids

Min and Tosha reading the book to Barney 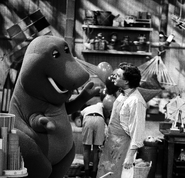 Promotional black and white photo of Barney and Professor Tinkerputt 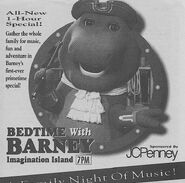 Newspaper ad with the "Bedtime with Barney" title

On the original NBC airing, an extended shot of Professor Tinkerputt looking out the window door accompanied with the final few notes of "Pop Goes the Weasel" was used. This short clip was edited out of all home video releases.