Barney Wiki
Register
Don't have an account?
Sign In
Advertisement
in: Barney Books, 1994, Books Written By Stephen White,
and 3 more

9781570640285
Barney's Imagination Island is an adaptation of the 1994 NBC prime-time special of the same name, released on April 12, 1994. It was adapted by Stephen White, who also contributed in writing to the special, and illustrated by Jay B. Johnson.

Based on the NBC prime time network special, which originally aired on television on April 24th, Barney's Imagination Island is a unique book that features specially adapted full-color art taken from actual scenes in the network special and includes Barney, Baby Bop, BJ and several of the familiar cast members from the Barney & Friends.

Barney comes to life and takes Tosha, Min, Shawn, Derek, Baby Bop, and BJ by ship to an island where they meet Professor Tinkerputt, a toy inventor, who does not want to share his toys. 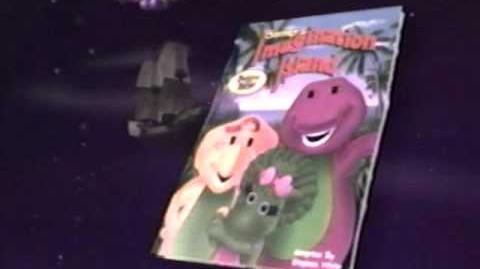