Let's Go to the Moon

Let's Go to the Moon

66 Minutes
Let's Go to the Moon is a Barney & Friends Episode Video that was released on January 8, 2013.

Star Light, Star Bright, let’s go on a outer space adventure tonight! Barney encourages Riff to always reach for the stars, even when his homemade spaceship doesn’t reach Mars; Baby Bop learns about Mr. Moon’s important job lighting the night for the world, and BJ sees he’s special just the way he is – astronaut or not. Barney and his friends discover that the sky is not the limit when you use your imagination! 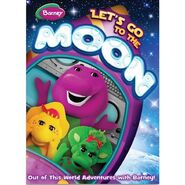