Let's Go to the Zoo

Let's Go to the Zoo

BJ makes the trip to the zoo a photo safari, taking pictures of all the animals, while Baby Bop looks for a real elephant to show to her doll "Nelly the Elephant." And there's an unexpected guest - Scooter McNutty - who searches the zoo for an exhibit devoted to the noblest of animals: the squirrel! There's an abundance of animal fun and facts, songs and surprises when Barney takes YOU to the zoo.

Filming Location: Production for this video took place in July 2000 at the Fort Worth Zoo In Texas USA

Barney's Zoo Tour was a tour to promote the home video, "Let's Go to the Zoo". It originally toured at different zoos in the United States from July 2001 until August 2001. It toured UK zoos the following year and in Germany in 2003. 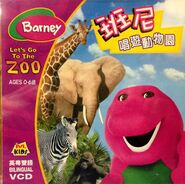