This video is not to be confused with the 1994 video.

Let's Pretend with Barney is a Barney Home Video that was released on May 11, 2004. It features two halves that were later split into two episodes. Those episodes are "Let Your Creativity Fly!", and "Imagine That!".

Imagine the fun you'll experience with Barney and his friends as they build their own airplane and go on a tropical island adventure. From pretending to be a pirate in search to find buried treasure, Barney's friends discover that creativity lets them soar on the wings of imagination!

Australian DVD release (along with What's In A Name?) 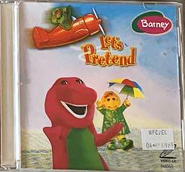 Retrieved from "https://barney.fandom.com/wiki/Let%27s_Pretend_with_Barney_(2004)?oldid=224884"
Community content is available under CC-BY-SA unless otherwise noted.