Love To Read, With Barney

Love To Read, With Barney

Love To Read, With Barney is a Barney Clip Show that was released by The Lyons Group, JCPenney, and the American Library Association. It was only available by getting it at libraries, which makes it very hard to find. It was released on December 19, 1993, and is a clip show of Season 2 episodes.

Barney has been returning a library book to the library. He meets up with Ms. Stevens, who is a librarian, and she shows Barney all over the library and tells him about programs and activities that go on over there. Clips from Season 2 episodes related to the topics that Ms. Stevens and Barney talk about, are also shown. 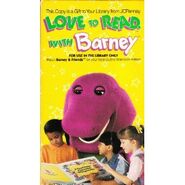