Acquired and folded into HIT Entertainment

The company's origins traces its beginnings to when Barney & Friends became a huge success. Barney & Friends was owned and produced by The Lyons Group, a company that was owned by Richard C. Leach, who previously produced its predecessor Barney & The Backyard Gang. Both series were created by Sheryl Leach, the daughter-in-law of Richard. In 1994, Richard Leach had begun production on a new series titled Wishbone, which was produced by Big Feats! Entertainment. Because of the emerging video business,[9] it led to the creation of Lyrick Studios, which was formed under its parent company Lyrick Corporation. Richard Leach's vision for Lyrick Studios was to expand the offerings of quality children's entertainment products.[10] Both The Lyons Group and Big Feats! Entertainment became subsidiaries of Lyrick Studios.[11]

In the late 1990s, Lyrick turned its primary focus on distribution of children's TV shows and films. They acquired the distribution rights for VeggieTales and The Wiggles and also distributed book publishing and video gaming rights for some Humongous Entertainment video game characters like Putt-Putt, Freddi Fish, and Pajama Sam.

In 1999, Lyrick planned to expand their existing headquarters to add 400,000 square feet. The first phase of the campus was expected to cost $6 million, which consisted of a two-story 60,000-square-foot building. The goal of the building expansion was to unite the company's operations in one spot.[3]

Leach, who was now in his seventies, was ready to slow down and wanted to resolve ownership of Lyrick, although none of his children wanted to run the company. In 2001, the company was acquired and folded into HIT Entertainment for $275 million,[13] with eventual Lyrick CEO, Robert Lawes, being the driving force of the acquisition.[14] Leach decided that HIT Entertainment was a good fit for Lyrick as he believed the two companies shared the same values about creating quality programs for the preschool market.[15] The deal included that 'Lyrick Studios' was to be retained as a consumer brand for existing Lyrick properties, however, the Lyrick Studios name disappeared a few months after, as Lyrick merged into HIT Entertainment. Richard C. Leach was to be appointed a non-executive director of HIT on completion. He died of a heart attack Tuesday, May 29, 2001 in Dallas-Ft. Worth Airport.[16]

Due to the HIT acquisition of Lyrick and the death of Lyrick founder Richard C. Leach, it made Big Idea, owners of VeggieTales, wary of giving the distribution rights to a company that, to quote Big Idea founder Phil Vischer, "was no longer interested in working with properties they didn't own."[17] In December 2001, Big Idea announced that they would be switching their general market distribution to WEA. The following month, Lyrick sued Big Idea for breach of contract and the case went to trial in April 2003.[18] Lyrick argued that their draft agreement with Big Idea was binding, while Big Idea argued that the terms were still under negotiation and they never formally signed a contract. The court agreed with Lyrick, awarding Lyrick Studios $11 million in punitive damages, but the verdict was overturned on appeal two years later, and the Big Idea appeal was affirmed at the Supreme Court when they declined to take the case.[19] [20]

Early logo, as seen on original printings for "Kids For Character". Later printings used the next logo.

First intro, from 1997-1998, used in Barney's Adventure Bus, Barney's Good Day, Good Night, It's Time for Counting and Down On Barney's Farm. It's also used in Kids For Character: Choices Count!

Variant with the Distributed by logo in white. It was used in Barney in Outer Space, as well as the beginning of Barney's Good Day, Good Night and the screening copy of It's Time for Counting. It was also used in a couple of Veggietales tapes, Wishbone, and Shelley Duvall tapes.

The opening scene of the 1998 logo takes place in a lake surrounded by a forest. It also showcases a waterbird swimming throughout.

The off-centered prototype logo, as used in Barney's Great Adventure.

Third intro, from May 1998-May 2001. It would be used starting with Barney's Big Surprise.

Fourth intro, with the "Distributed by" title card on top. Taken from non-Barney releases. 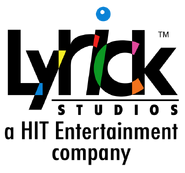 In November 1998, it was announced that BJ was going to have his own animated spin-off series titled BJ and the Radical Rumblebutts which would've been produced by Lyrick Studios and Toronto’s Portfolio Films.[23]

The project came into fruition after the success and acclaim earned by its previous preschool series Groundling Marsh, which aired on YTV in Canada for five years. The show's success caught the attention of Lyrick Studios. Lyrick was looking to acquire additional properties for home video sales and merchandising and approached Toronto-based Portfolio about the Groundling Marsh series. Lyrick had identified the opportunity to create a spin-off with the character BJ, with Tim Clott, who was CEO at the time, deciding that Toronto's Portfolio Films was best suited for the project.

The show was to be made on a budget of $400,000 per half-hour with the Canadian broadcaster being YTV. A broadcaster for the U.S. was yet to be determined. Lisa Olfman, founder of Toronto's Portfolio Films, mentioned that test marketing showed that boys lost interest in Barney & Friends by the age of four, but BJ had a strong following in young boys. Expected for a release in 2000, BJ was to be aged up for the show's target demographic.[24] The project didn't come to fruition, but scripts were written.