Barney's Magical Music is a Barney video game that was released in 2000. It came packaged with a playset, which is attached to the keyboard. The game can also be played with only a keyboard, if the player knows what buttons to press (as the playset presses certain buttons on the keyboard).

The playset features five different instruments used to play the game. The instruments are a trumpet, a violin, a three-key piano, a bongo, and a foot drum.

Areas of the Game

The player selects one of three types of music: Country, Rock N' Roll, or Latin, and selects the speed of the music: fast, medium, or slow. Then, use the instruments on the playset to play along to the song!

Play Old MacDonald, Turkey in the Straw or mix up The Itsy Bitsy Spider.

Play The Land of Make-Believe, Silly Sounds, BINGO or the music game about manners.

Use the playset instruments to make the animals sing along with Baby Bop to Old MacDonald.

Select a shape by pressing one of the piano keys to create a silly version of The Itsy Bitsy Spider. (example: the squirrelley turtley spider climbed up the waterspout.)

Use the playset instruments to make the jungle animals sing in Boom Boom, Ain't It Great to Be Crazy

Select a shape by pressing one of the piano keys to create a silly version of Twinkle Twinkle Little Star. A very Mad-Libs like game, you pick different words to replace the real lyrics. An example would be "Like a lizard in the sky."

Use the playset instruments to make the fairytale animals sing to The Land of Make-Believe.

B. The Fairytale Magic Word Game

Use the playset instruments to make all the fairytale characters sing 'n' play along to London Bridge. However, you may only play when Barney says "Please."

C . PIcture Your Own Kingdom

Use the playset instruments to create a picture of a magical kingdom while listening to Silly Sounds. Pressing different buttons.

When the mice peak their heads out from behind an instrument, use the playset instruments to surprise them while listening to BINGO.

A. The Print Activity

Print out all sorts of fun coloring pages.

A collection of all the silly songs created throughout the game.

Barney instructs the player on how to use the keyboard 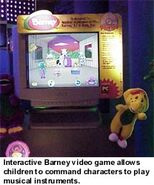 Early prototype of the game from the 2000 NY Toy Fair
Community content is available under CC-BY-SA unless otherwise noted.
Advertisement