Making New Friends is a Barney & Friends Episode Video that was released on August 8, 1995.

For more information, see "On the Move". 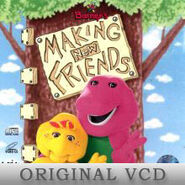 Retrieved from "https://barney.fandom.com/wiki/Making_New_Friends?oldid=220519"
Community content is available under CC-BY-SA unless otherwise noted.